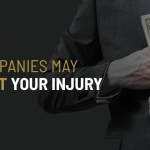 Despite these facts, the stories we are most likely to hear are the ones about injured workers who were gaming the system — like the one about the injured worker receiving benefits who was also conducting river tours along the Delaware River in Pennsylvania, or the woman in California who claimed she couldn’t work, but who was competing in rodeos. These are clear-cut cases of workers’ compensation fraud that make for sensational headlines in the media and lead many to believe insurance companies’ claims that filing false workers’ compensation claims is widespread.

Only about 1 to 2 percent of the millions of workers’ compensation cases filed each year are fraudulent. But employers and their insurance companies are always looking for ways to pay less money to injured workers and so they may try to discredit their employees as a way to avoid having to pay benefits.

How Companies May Try to Discredit Your Injury

There are numerous ways your employer or their insurance company will try to discredit your claim and end your right to receive any workers’ comp benefits.

1. Hurt off the Job Site

Under workers’ compensation in Pennsylvania, if you get hurt off the job site, you may still eligible to receive benefits. So if you are a truck driver making deliveries in another part of the state, a linesman for the phone company or even picking up office supplies your boss asked you to get on your way home, and you suffer an injury that prevents you from working, workers’ compensation should cover it.

It is not uncommon, however, for your employer or their insurance company to claim the injury you suffered offsite was unrelated to your job. They’ll say you hurt your ankle playing softball or strained your back while lifting a heavy box in your basement, and that you are trying to use workers’ compensation to pay for your non-work-related injury.

Some of the best ways to protect yourself from an attempt by your employer or their insurance company to deny your claim on this basis are:

On-the-job soft tissue damage, which frequently occurs with back, shoulder or neck injuries, is a common reason for employers to attempt to deny workers’ compensation claims. Since it can be difficult to show these injuries on X-rays or even MRIs, they are easy targets for employers and insurance companies to say you are faking and are not hurt as badly as you say you are. For instance, it’s common for an insurance company to state a severe back sprain is only a minor injury that does not require you to stay off the job for more than a few days.

If you want to fight back against these accusations, some of the things you can do include immediately reporting the injury and seeking medical attention. If your employer requires you to see a company-named physician, make sure you show up for regular appointments and keep a daily journal that details how your injury has affected your job and your life. Do not exaggerate.

If it’s possible without too much disappointment, it may also a smart idea to cancel any planned trips or vacations while you are injured — not only because resting will help you heal faster, but because the insurance company may use these planned trips as evidence you are not hurt as badly as you say you are.

Also, be very careful of anything you post on social media. The insurance company can find ways to twist even pictures or posts that seem entirely innocent to you. It is always wise to only discuss your injury with your immediate family members, your physician and your attorney.

This claim by an employer and their insurance company is very similar to the above-mentioned assumption of exaggerating your injury. Insurance companies will claim you are not injured at all to avoid having to pay workers’ compensation. This tactic is frequent for workers who have suffered a soft tissue injury, or perhaps a work-related illness through exposure to toxic materials. Insurance companies will often target repetitive stress injuries (RSIs) like carpal tunnel syndrome with these claims, because they are harder than other claims to substantiate.

Here are some strategies to help you fight back against these tactics:

Remember, insurance companies will find every bit of evidence they can to deny you the benefits you are entitled to receive through workers’ compensation. They don’t care how injured you are – that’s not their job. They believe that their job is to reduce the amount of money they have to pay out. That’s why insurance company adjusters sometimes hire private firms to track people they suspect of fraud. Insurance companies might contact your family, your friends and your neighbors to determine the extent of your injury.

When you are injured and trying to recover, it can be challenging to remember you need to prepare for the insurance company to use these kinds of tricks. It is an excellent reason to hire a workers’ compensation attorney to help you.

Insurance companies, however, might try to argue this older injury has never completely healed and that you did not hurt yourself on the job, but that you never stopped hurting from the old injury. Insurance companies will say they understand a work-related injury that aggravates an older injury can qualify for compensation, but they then deny you suffered an aggravation.

In this situation, producing medical records can play an essential role in fighting back against this accusation. If medical providers had previously told you to be careful about doing a certain kind of work, but your job requires you to do this work, it will go a long way toward proving you have aggravated an earlier injury. If you have co-workers who witnessed your accident, or other witnesses who may have seen you injure yourself off the job site, make sure you get their contact information to your attorney.

5. Saying You Are Still Hurt When You Can Work

Employers and insurance companies will frequently complain workers are staying off the job longer than necessary — which is more commonly called malingering or goldbricking. This issue was one of the reasons they demanded the Pennsylvania legislature pass a new law requiring an independent rating evaluation every two years after the Pennsylvania Supreme Court initially ruled it unconstitutional in 2017.

Employers’ insurance companies want to find a way to cut down on the benefits they must pay to injured workers who have suffered total disabilities. This accusation is also common against workers whose injuries may require them to miss several weeks or months. It is also one of the most frequent kinds of instances of genuine workers’ comp fraud, like the man mentioned above who claimed he was still injured while guiding fishing tours. Thus, it is easy for insurance companies to make these claims against workers or to use them to argue with legislators that the workers’ comp system needs “fixing.”

In actuality, the law requires insurance companies to pay workers’ compensation benefits until a physician has given the employee a full bill of health or said they have reached maximum medical improvement, the point at which the doctor believes the patient will not recover any further. Employers must pay workers’ comp benefits until a worker is fully recovered or until work is available and the employee could return to work under their physician’s restrictions.

In all cases, follow your doctor’s orders. Keep all appointments. Check in regularly with your employers to let them know your most recent medical reports. Be wary of posting anything online for fear insurance companies will find and misuse it. If you believe a doctor has cleared you for work before you are ready to return, contact a workers’ compensation attorney immediately.

Why Companies Are Worried About Insurance Fraud 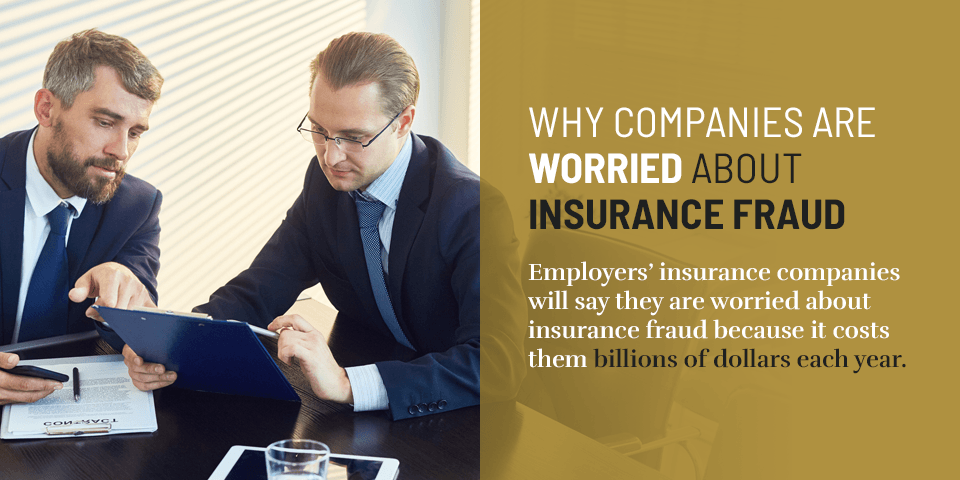 Employers’ insurance companies will say they are worried about insurance fraud because it costs them billions of dollars each year.

Originally, they said workers’ comp fraud cost them about $3 billion a year nationally. It then became $7 billion a year, while some insurance company executives have said it cost the industry as much as $15 to $30 billion a year. It is common for employers or insurance companies to cite these figures without ever offering documentation or proof of the actual cost.

Ultimately, they tell the public this is like taking money out of their pockets because, in the end, consumers will pay for all these fraudulent workers’ comp claims. They will also tell you this not only hurts them, but workers who have legitimately gotten hurt on the job, because it makes it harder for them to prove their case. They will complain the workers’ compensation system is “out of control.”

Unfortunately, much of this is misinformation.

Pointing the finger at false workers’ comp claims is a way for employers to avoid making the kind of changes they must make within the workplace to give their workers better protections on the job.

What Do I Do to Protect Myself and My Claim?

If you want to protect yourself and your workers’ compensation claim, remember to follow all the suggestions we made above:

One of the most essential things you can do is to seek advice from a qualified workers’ compensation attorney. A workers’ comp lawyer will not only give you advice on the best way to deal with accusations of a fake workers’ comp claim from your employer and their insurance company, but will also help you gather evidence and prepare a case to show you are living with a legitimate injury.

Remember, workers’ comp insurance companies will do everything in their power to reduce the amount of money they have to pay you in benefits. They are not looking out for your best interests. A workers’ compensation attorney, on the other hand, will protect what’s best for you and fight to ensure you receive the benefits to which the law entitles you.

Fight Back Against Claims of Workers’ Compensation Fraud 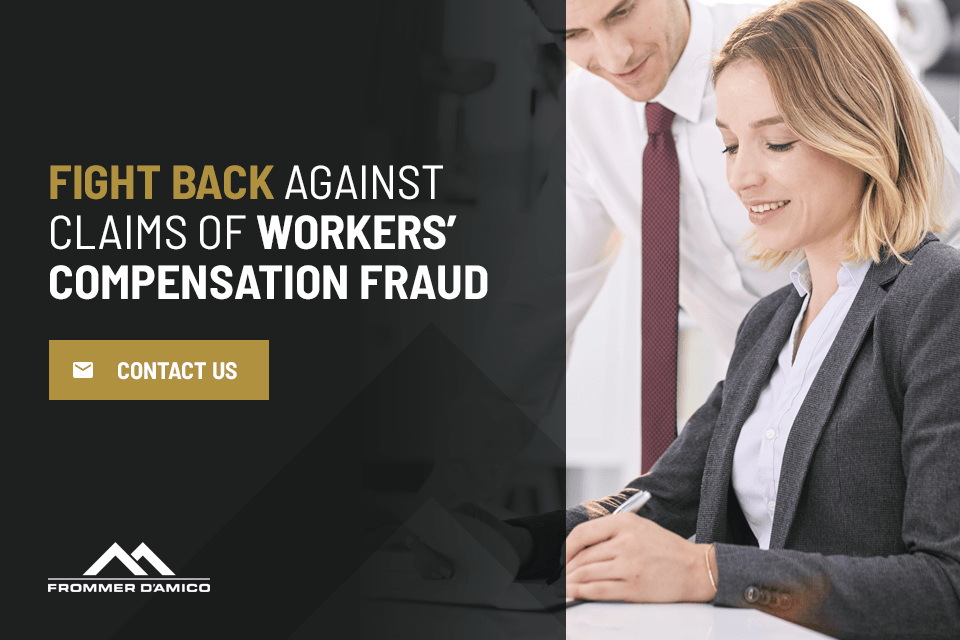 When you need to find a trusted attorney who can help you deal with accusations of workers’ compensation fraud from your employer or their insurance company, count on the knowledgeable and experienced workers’ comp lawyers at Frommer D’Amico to provide you with the individualized attention you deserve.

We invite you to call us at 717-400-1000 or visit our contact us page, where you can leave us your contact information and a few details about your case. A member of our team will get back to you as soon as possible to help you get the compensation you deserve!