Although it’s a topic few people want to think about or discuss, the reality is that sometimes a worker is killed on the job. For instance, 5,147 U.S. workers were killed in job-related accidents in 2017. That’s 99 workers’ deaths a week and more than 14 every day over an entire year. While health and safety measures have greatly reduced the number of workers’ deaths in the United States – there were 38 a day in 1970 – they still happen.

Losing a loved one is one of the most painful experiences you can go through in life. An unexpected death tied to your loved one’s occupation may seem even harder to bear. You may wonder if the death could have been prevented through better safety practices or if negligence on the part of their company led to their passing. The frustration and anger you feel are understandable. While nothing can replace your loved one, you may be eligible to receive a workers’ comp settlement after your loved one’s death.

To determine whether you are eligible to collect death benefits, you can consult with an experienced attorney who can advise you on Pennsylvania policies. You may appreciate the assistance as you work through your emotions and mourn the passing of your loved one.

How Likely Is It to Die at Work?

The industries in 2018 with the highest number of workers’ deaths were construction, transportation, agriculture and mining and extraction.

We quoted some of the figures above about work-related deaths in 2017, but let’s look more closely at construction. Construction is considered private industry. In 2017, 4,674 employees working in private industry died. One in five of those deaths occurred in construction-related industries.

The four leading causes of construction workers’ deaths are, in order:

Even among the Fatal Four, you can see that the greatest danger to workers on a construction site is falling. In 2017, they accounted for 887 workers’ deaths in all industries. These falls are normally from a height or scaffolding.

For instance, in Pennsylvania in 2018, workers died in falls from roofs, aerial lift baskets, balconies, catwalks and scaffolding.

An even more concerning fact is that 15% of the workers who died in job-related accidents in 2017 were 65 years or older. It’s an age when a worker may be leaving behind a spouse who has no other source of income other than the deceased worker’s paycheck.

What Happens If Someone Dies at Work? 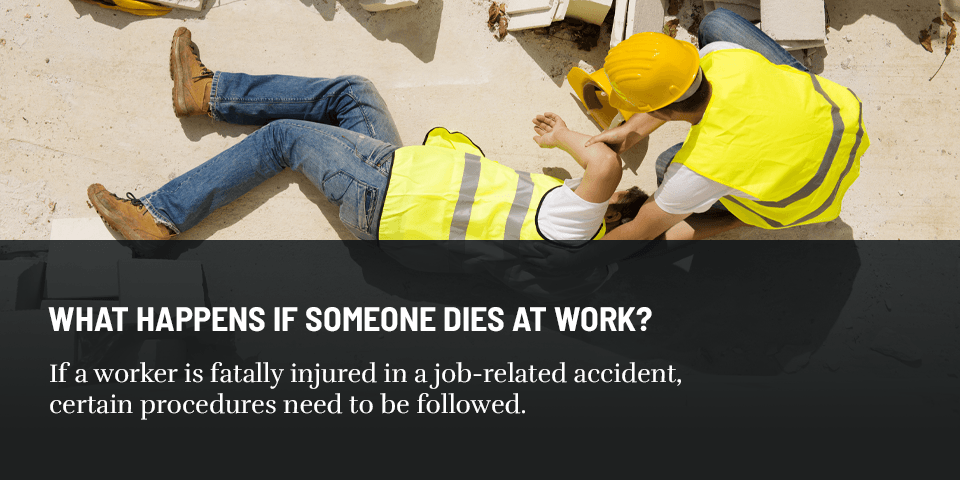 If a worker is fatally injured in a job-related accident, certain procedures need to be followed by your employer. Responsibility for many of these required actions falls to the human resource department if the company has one.

The first step for your employer is to contact emergency services and the appropriate authorities, such as police or fire, to let them know a fatal accident has occurred. Your employer should provide emergency contact information for the deceased to the authorities.

The United States Occupational Safety and Health Administration (OSHA) also needs to know when any job-related fatality has occurred. This is the case even if an employee has died from natural causes, such as a heart attack. A business has eight hours to report any work-related fatalities to OSHA. They do this by either calling OSHA or reporting the incident in person to the closest OSHA location. OSHA does not accept written notices.

If an employee dies within 30 days of a job-related accident, the same procedures need to be followed.

In Pennsylvania, job-related fatalities must be reported to the Bureau of Workers’ Compensation within 48 hours of when they occur.

After your employer has given proper notification to local authorities, OSHA and the Bureau of Workers’ Compensation in Pennsylvania, the business needs to prepare the deceased worker’s final paycheck. This will be done according to state law and should include items such as sick leave, personal days or vacation that the deceased employee was eligible to receive at the time of their death.

Depending on the size of the business, the family of the deceases worker will likely need to deal with issues such as terminating health insurance if it was provided by the company, as well as explaining to beneficiaries any pension, life insurance or death benefits that the company may provide.

To claim death benefits after your loved one’s passing, you must take action quickly. You should inform their company within a few weeks of their death that you are filing a claim. The company should have told its insurance carrier about the death already. You have three years to file for death benefits, but the sooner you make your claim, the sooner you can begin receiving the money you deserve.

One reason that the survivors should file a fatal claim petition as soon as possible is that workers’ compensation provides up to $7,000 for burial expenses for a deceased worker.

There are situations where an employer’s insurance company may refuse to pay death benefits because they believe that the claim is invalid. For a deceased worker’s family to be eligible for death benefits:

If your loved one is killed on the job and you and other dependents are confirmed as eligible to receive death benefits, the amount you receive will depend upon your relationship to the deceased and how financially dependent you were on the deceased.

The following family members may be eligible to receive death benefits:

Who Receives the Death Benefit?

The breakdown of death benefits is as follows:

Children of the deceased worker would continue to receive benefits until they were 18, or 23 if enrolled full-time in a college, university or trade school. If a child was physically or mentally incapacitated, they could be eligible to receive benefits for the rest of their lives.

Eligibility can depend on several factors. Death benefits are not “automatic” to the survivors of a deceased worker. If you think that you might be eligible for worker’ compensation death benefits in Pennsylvania, you should speak with an experienced workers’ comp attorney. If you have applied for death benefits, but the deceased worker’s employer has denied your claim, this is another reason to seek the advice of an experienced lawyer about how you should proceed and if you should appeal the decision.

Contact Frommer D’Amico If You Have Questions About Death Benefits 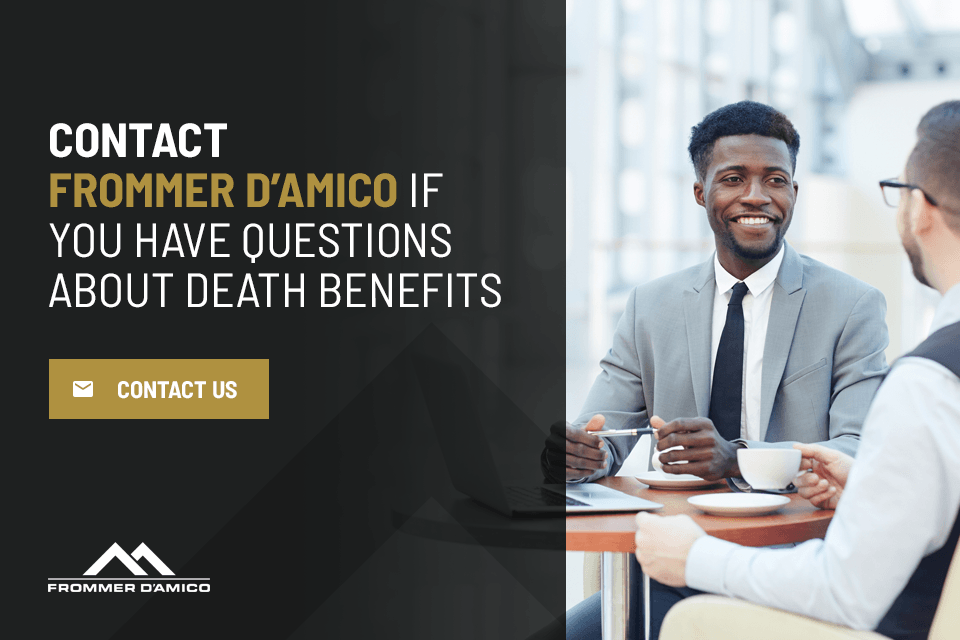 If you have lost a loved one in Pennsylvania while they were on the job, you may still be recovering from the hurt of their death. You deserve compensation for their passing, whether it occurred in an accident or as a result of a disease, such as respiratory illness, they contracted on the job.

Contact the attorneys at Frommer D’Amico to get the assistance you desire with your case. Our workers’ compensation specialists only take these types of cases, and we charge lower fees than other firms. Make an appointment for a free initial consultation today, and we will come to your house to meet with you. Contact us online or call us at 717-400-1000.

WHAT OUR CLIENTS ARE SAYING

See Why Our Clients Love Us

Call Us Now for A Free Consultation