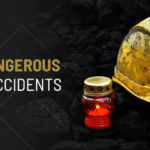 The coal mining industry can be a dangerous one for workers. Accidents in mines can lead to injuries, illnesses and fatalities. Coal mining deaths most frequently occur during contact with objects and transportation or during equipment incidents. Most serious illnesses and injuries require workers to take days off of work, leading to the possible loss of income for injured or ill workers.

In 2019, more than 10 fatal injuries occurred in the coal mining industry in the United States. If you have been injured in a coal mining accident, you may want to hire a workers’ compensation attorney who can help you receive the benefits you deserve. 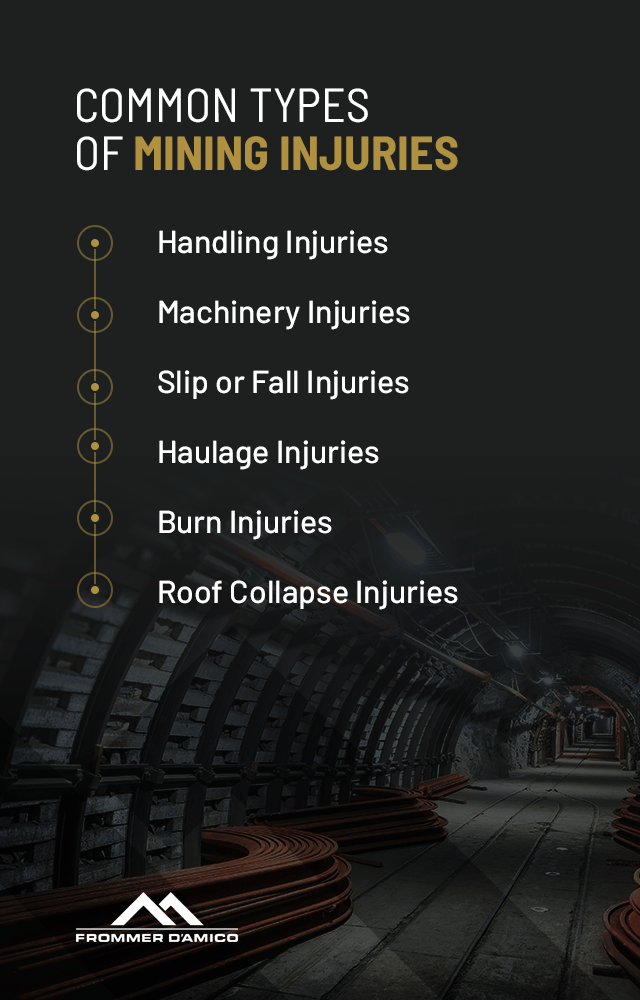 A machinery injury occurs when the motion or action of a machine or the failure of a component part causes an accident. Machinery includes air-powered and electric tools and mining machinery, such as:

Cranes and derricks may also fall under this category, unless the accident occurs during shaft sinking or while the mobile crane is traveling with a load.

A slip or fall injury can occur in several situations. You may suffer a slip and fall injury at the same level or an elevated position while climbing on or off haulage equipment or machinery that is not moving. A slip or fall accident can also occur after stepping in a hole or while repairing or servicing machinery or equipment.

A haulage injury can occur as a result of the accidents that involve:

Accidents are caused by the haulage unit’s motion and include incidents caused by the failure of a component part or by a moving or energized unit. If you are a car dropper and you suffer an injury after falling from a moving car, your accident would be charged to haulage.

A miner can suffer a burn injury from several different sources, such as:

Burn injuries can be extremely painful and difficult or slow to heal. These injuries can require a long period of medical care and treatment. If your burn injury is caused by employer negligence, you may be able to recover financial support to cover your medical costs and lost income.

As a coal miner, you face the risk of being injured due to a roof collapse. While many regulations and guidelines are in place to help prevent these accidents from occurring, they are not always followed or may be implemented haphazardly. When this happens, you and your family are the ones who may pay the price.

A roof collapse can lead to a crush injury. A miner may also suffer a crush injury while being near or using heavy equipment, particularly if the machinery is defective. The frequency of these injuries and the high risk facing miners is why it is crucial to hire an experienced attorney. Lost wages and medical bills can be financially devastating to you and your family. When you have an attorney on your side, you can ensure your rights are protected.

Firmer safety regulations and technological improvements have reducedmining accidents and deaths, but accidents still remain too common. To illustrate the dangers and severity of the industry, we have compiled a list of mining accidents that have been history’s most dangerous: 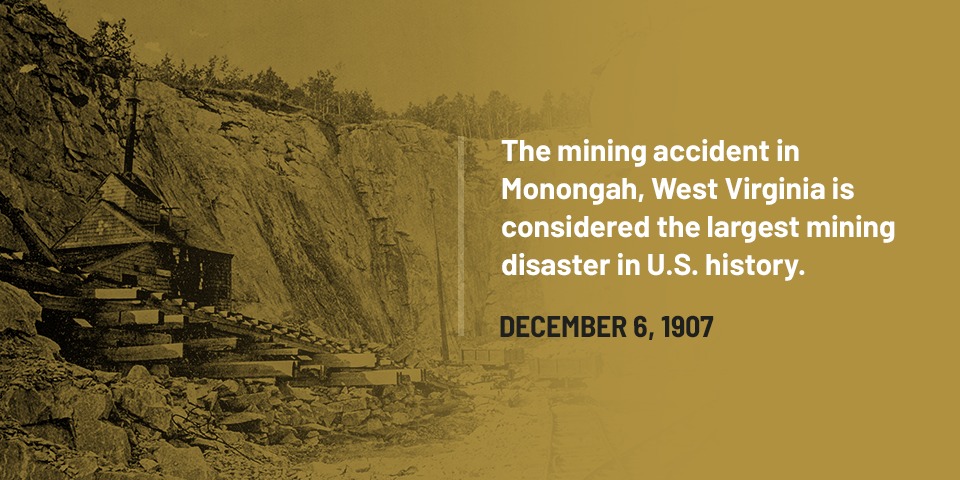 1. Monongah Mining Accident in the U.S.

The mining accident in Monongah, West Virginia is considered the largest mining disaster in U.S. history. At two of the mines in the Monongah facility, the disaster killed hundreds of workers on December 6, 1907. The majority of the disaster’s victims were Italian immigrants.

Firedamp and coal dust caused the disaster in mines six and eight. The initial ignition’s source was attributed to open lights or electric arcs. The coal dust explosion destroyed the boiler-house, ventilation system and the openings of the number eight mine. Due to a lack of breathing equipment, rescue workers were barely able to work for the first several minutes. Most miners were killed instantly, and rescue attempts were dangerous and difficult for those who were trapped below. Some rescue workers also died of suffocation.

The mining accident at Senghenydd Colliery is the worst that has ever occurred in the United Kingdom. Also referred to as the Senghenydd Explosion, the disaster resulted in the deaths of 439 miners on October 14, 1913. The accident occurred in the underground mine due to an explosion of coal dust. The majority of the miners who managed to survive the explosion and fire died from carbon monoxide poisoning.

Firedamp ignition was suspected as the start of the explosion, which was possibly caused by electric sparking from equipment like electric bell signaling gear. The coal dust that was on the floor was ignited by the initial fire, resulting in an explosion that traveled throughout the underground workings.

The United Kingdom’s second-deadliest coal mining accident occurred at the Oaks Colliery in South Yorkshire, which was one of the largest mines in England. Hundreds of miners are reported to have died in the disaster on December 12, 1866. The next day, there were two additional explosions that killed a couple dozen rescue workers. Until the Oak Colliery finally ceased operations, 17 more explosions took place.

The suspected cause of the accident was a coal dust and firedamp explosion, which may have been ignited by new workings being dug. The presence of firedamp in the mine was noted after a disaster that occurred years earlier. 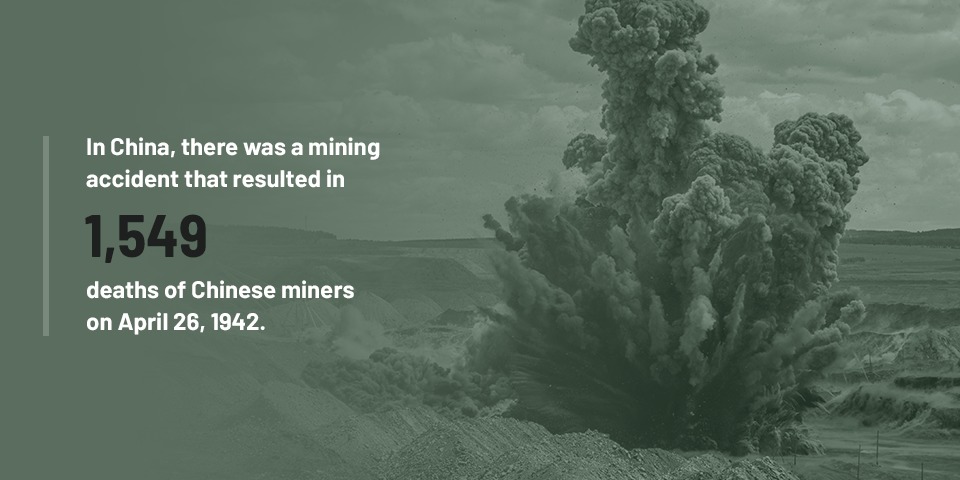 In China, there was a mining accident that resulted in 1,549 deaths of Chinese miners on April 26, 1942. This is widely considered the most tragic coal mining accident in world history, and it took place within the Honkeiko mine.

At the time of this accident, the mine was under the forceful operation of the Japanese Army during the Sino-Japanese War. The Soviet Union conducted an investigation into what caused the disaster after the Liaoning province was liberated from the control of the Japanese Army. During the Japanese control, Chinese laborers were forced to work in deplorable conditions – their clothing was in tatters, shoes lasted just a few days, food was scarce and diseases like cholera and typhoid flourished.

A mixture of coal dust and gas caused the explosion in the underground coal mine, and the fire exploded through the mine shaft entrance. To cut off oxygen to the underground mine, the mine operator shut off the system for ventilation and sealed the pit head. Despite the explosion, the cause of the majority of the accident’s deaths was poisoning from carbon monoxide as a result of the ventilation system’s closure.

China’s second deadliest coal mining disaster occurred within the Laobaidong mine in 1960. This coal mine was located in the province known as Shanxi near Datong, and the accident killed hundreds of people.

A methane explosion caused the mining accident. For a few decades, the government in China suppressed information about the disaster. Since the People’s Republic of China’s inception, the Laobaidong accident is the country’s most fatal coal mining accident.

In Japan, the deadliest mining disaster occurred in 1914 at the site of the Mitsubishi Hojyo mine and caused the deaths of 687 miners. An explosion of gas caused the accident at the mine located on Japan’s Kyushu Island.

The explosion took place underground and resulted in black smoke gushing from the air vents and a huge blast that sent an elevator cage up in the air. Those who were within a couple hundred meters of the mine’s entrance were affected by the mine’s explosion as well.

Japan’s second deadliest coal mining accident occurred at the Mitsui Miike mine on November 9, 1963. Approximately 555 miners were injured and 458 were killed during the disaster. Below the entrance to the mine at ground level, a coal dust explosion caused an enormous blast, resulting in the tunnel roof collapsing in multiple locations.

A lack of safety provisions was the main cause of the accident and fatalities, as the majority of the fatalities were caused by poisoning from carbon monoxide. Those who survived the carbon monoxide poisoning suffered significant brain damage. Immediately following the accident, rescue efforts and an investigation into the accident’s cause began. The operation of the mine was also suspended.

South Africa’s worst mining accident occurred at the Coalbrook mine. The accident resulted in the deaths of 435 miners at the site of the Coalbrook North Mine near Sasolburg.

The accident occurred when the underground mine collapsed as a result of hundreds of underground pillars disintegrating. These pillars supported the tunnel roofs, and only about half of the miners were able to escape the collapse via an incline shaft. The rest were crushed by rockfall or suffocated by methane gas. Some of the rescue workers died as well after becoming trapped with methane gas and the collapsed ground.

In France, the Courrieres mining accident that took place on March 10, 1906, resulted in 1,099 fatalities and injured hundreds. The accident occurred as a result of a massive explosion that was started by an underground fire in one of the Courrieres Colliery’s pits. The day prior to the explosion, the fire was detected in the Cecil pit and the pit’s outlets were closed to deprive the fire of oxygen.

The next day, the still-smoldering fire caused a massive explosion, and many workers inside the mine and on the surface were killed in the accident. It is believed fissures within the pit’s walls allowed flammable gases to cause an underground coal dust explosion. As for the initial fire that led to the explosion, a mishandling of mining explosives or ignition of methane by a flame from a miner’s lamp are the suspected causes.

The mine’s explosion became a blast that destroyed the mine’s main shaft, instantly killing a few men close to the surface. Hundreds of workers died in the underground mine after becoming trapped amid the rock and the deadly carbon monoxide and methane fumes.

A dynamite magazine is suspected to have caused the initial explosion. Victims of the coal mine accident included hundreds of Africans and dozens of Europeans. Two additional explosions occurred the following day, filling the tunnels with poisonous gas and rendering rescue attempts out of the question. 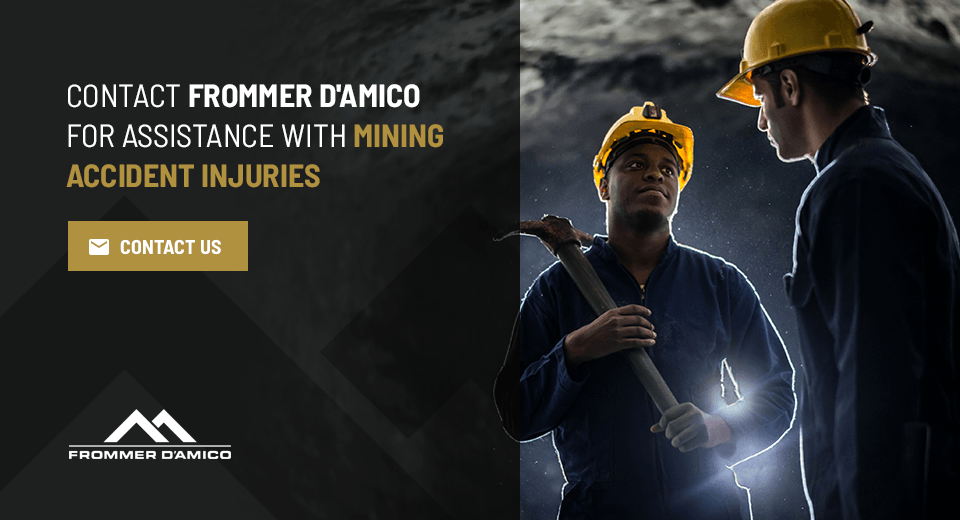 At Frommer D’Amico, we offer legal representation to injured workers. If you are facing challenges in receiving the workers’ compensation benefits you are deserved, we can assist you in filing your claim or filing an appeal following a claim denial. Our attorneys are solely focused on helping injured workers in Pennsylvania get the compensation they deserve.

Contact us at Frommer D’Amico if you have been injured in a mining accident. We will provide a free, confidential consultation to get started.